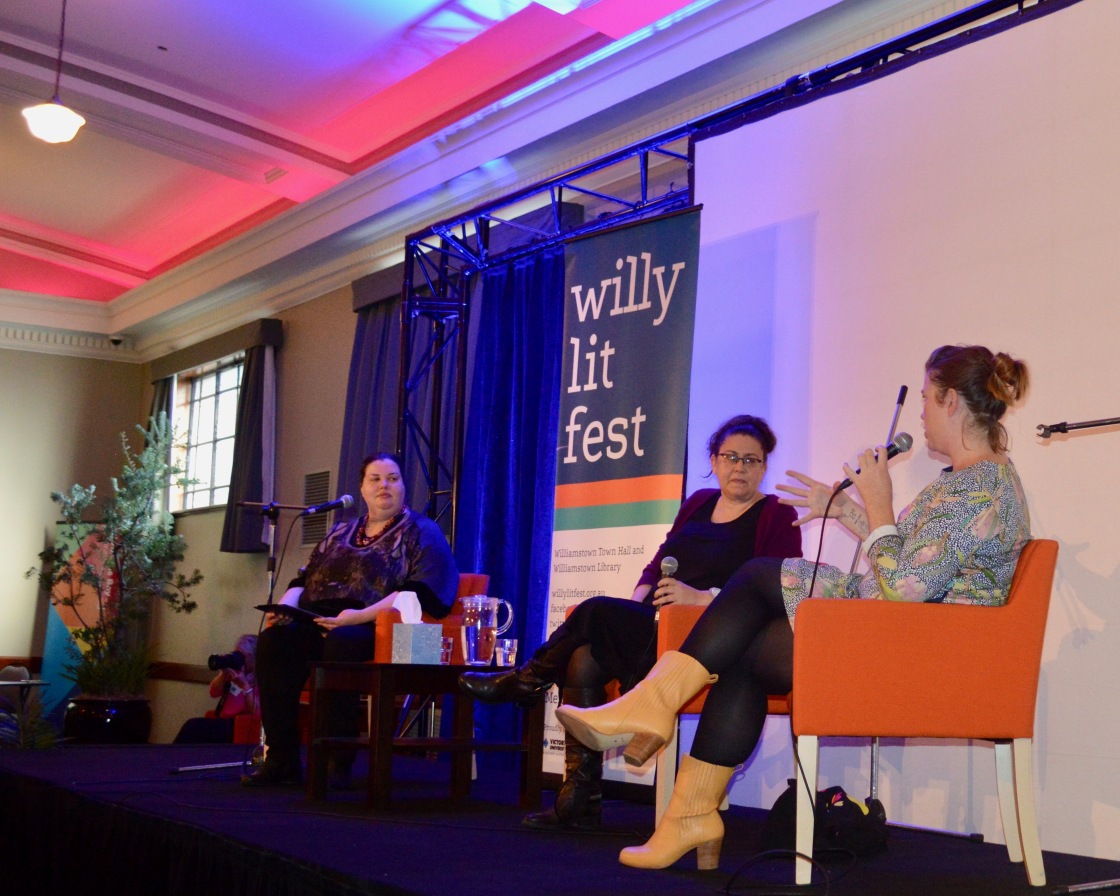 Academics, Jenny Lee and Trisha Pender, joined writer and feminist, Clementine Ford on stage at the Willy Lit Fest, to discuss Buffy the Vampire Slayer as a feminist icon. The Williamstown Town Hall Supper Room was packed. A crowd of mostly women, and a spattering of men, sat eagerly awaiting the lively discussion. The panel did not disappoint.

The atmosphere was charged, as Ford rallied her troops. Her stage presence was commanding, as she engaged her fellow panellists.

Clementine Ford is the seminal voice in feminism and author of the brilliantly written, Fight like a Girl. I was thrilled to sit down with her after her time on stage, for an exclusive chat on all things Buffy and the best way to Fight like a Girl….

Drawing comparison between my favourite vampire slayer and Ms. Ford is not such a stretch… Into every generation, a slayer is born – surely this generation’s Chosen One can be found battling misogynists and archaic thinking, in place of Demons and Vampires? Reluctant to wear the title, Clementine is quick to disagree:

“I think that there can’t just be one voice in a generation – there are so many people that I learn from, so many people who educate me and change my mind and who I have to defer to . . . But I do feel privileged with the tr

ust that a lot of women put in me, to tell me their stories . . . I take that privilege very seriously and try to honour and respect that.”

Clementine’s openness has become her trademark – she is fearless and that entices others to follow her lead. Her book has been described as a call to arms, a manifesto for women – encouraging others to stand up and be counted, and it is working….

“I’ve had girls in their teens telling me that it resonates with them and women in their seventies – so many hidden stories, so much hidden trauma.” These revelations come as affirmation, that Ford is on the right path. There is a power that comes from standing as one and declaring for all to hear, “I’m angry and that’s OK!”

Anger plays a major role in Clementine’s feminist movement, with an entire chapter devoted to the simple, yet powerful concept that it is OK to be angry, “I’ve been really surprised by how many women that seems to be a revelation for!” In fact, Clementine offers up, that if you are not angry, then you simply aren’t paying attention.

As our conversation continues, I am struck by how many topics we are able to cover off. We discuss everything from the division of domestic labour, through to Adam Sandler films, and the value of being a writer. We have a lot in common and I am heartened by her journey from blogger to published author, a journey I hope to embark on myself, someday.

Another thing that we have in common, is that our sons were born one day apart, and I wonder how this woman who wants to change the world, is planning on raising her boy to be a part of the solution? What can we teach our sons, to make the world better for our daughters?

“I think that what we can teach our sons, is that the model of masculinity that they will be presented with . . . is not the only kind of masculinity. I think that what we can teach them, is to hold onto the things that we see in our sons now. Curiosity, kindness, love, empathy, gentleness – to hold onto those things and to recognise the humanity of girls. By encouraging the humanity of our sons, we will help to change the way that those boys are taught to see . . . girls.”

Clementine Ford may be reluctant to see herself as this generation’s Chosen One, but irrespective of her title, her role within this gender war is a vital one. Her willingness to put herself on the line for the betterment of others, is exactly what our future generations will look back on, as the changing of the tide in this battle for equality.

It changes based on the day

The Power by Naomi Alderman

Once More with Feeling (the musical episode, from Season 6)

What would your Patronus be?

A puppy…. actually, it’d probably be a penguin!